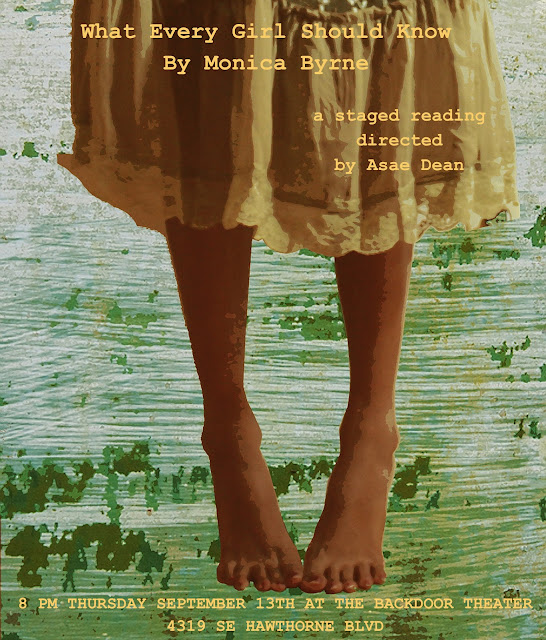 In April, I participated in “Wear All White for Women’s Rights,” a visibility protest. I own almost no white so I borrowed a lacey white sun dress from my roommate for the occasion. That morning, I taught my introduction to drama class and enjoyed seeing some of my students decked out in all white as well. I had rehearsal that evening for a feminist fairytale production of All’s Well That Ends Well (directed by that same roommate). First, however, she and I along with several members of the cast spent the half hour before call at a meet-up for the event, walking around downtown Staunton, following one of the event organizers as she spoke with a news crew about women's rights and recent threats to those rights such as the Virginia ultrasound mandate.

Back then, I had no idea that I would choose How I Learned to Drive as my first show to produce and direct when returning to Portland, and I had not even read the play What Every Girl Should Know, which I’m holding a reading of this Thursday. I just knew that I was tired of the politics of reproductive rights and the persistence of sexual abuse and violence. Wearing all white was a small way of expressing those feelings in a public forum. Choosing Drive and Girl as projects for this fall has been a way of carrying those feelings into my work.

Both How I Learned to Drive and What Every Girl Should Know deal with sexual abuse and sexual education. One of my favorite scenes in How I Learned to Drive is where Li’l Bit asks her mother whether sex hurts. She makes the mistake, however, of asking in front of her grandmother, sparking a fight between the women over just what a mother should teach her daughter about “the facts of life.” In What Every Girl Should Know, the mother of one of the girls, Joan, has been arrested for distributing illicit material, pamphlets about contraception written by Margaret Sanger. Joan and Li’l Bit are both smart girls. Vogel and Byrne, their respective authors, are wise in showing that intelligence is both a strength and a vulnerability.

While How I Learned to Drive is the story of one girl growing up in Maryland in the 1960s, What Every Girl Should Know is the story of four girls living at a Catholic reformatory school in New York City. The year is 1914. Women are agitating for the right to vote. Margaret Sanger - faced with obscenity charges in violation of the Comstack Laws - has fled to Europe. Although curious about the world around them, Theresa, Anne, Lucy, and Joan retreat into their own communal fantasy life in which they travel the world, take lovers, and assassinate their enemies. They seem safe within the confines of their friendship, until one of them becomes pregnant and the fantasy begins to crumble.  At the end of the play, the four girls have to make a decision about how they want to live their lives and about who their teachers are going to be. While How I Learned to Drive puts sexual abuse in the foreground, What Every Girl Should Know lets it be a backdrop to the girls struggles for self determination.

During a production meeting for How I Learned to Drive, my music director (who is also a clinical psychologist) shared how brilliant he finds Vogel’s choice to ground her play in the 1960s, a time just before America began to deal legislatively with child sexual abuse (see Child Abuse Prevention and Treatment Act of 1974), a time when the revelation that public figures like Marilyn Monroe had been sexually abused was shifting the notion that sexual abuse was something to shame women for (see review of “Marilyn: The Passion and the Paradox). That context made me think about how I hope we are undergoing another cultural shift in which attention turns toward educating potential assailants not to abuse or rape (see "Men Can Stop Rape" campaign as an example).

My hope with How I Learned to Drive is that audiences leave and have conversations with friends and loved ones about sexual abuse and the family dynamics and cultural contexts in which it occurs. My hope with this reading of What Every Girl Should Know is to inspire discussion about sexual education, access to contraception, unplanned pregancies, and the way girlhood has changed since the beginning of the last century.

What Every Girl Should Know is one night only, this Thursday September 13th at 8 pm, also at Backdoor Theater. The reading is free to How I Learned to Drive ticket holders, otherwise it is $5. See you there!

Love Stories: Lolita and How I Learned to Drive


How I Learned to Drive is a love story, a tale of sexual molestation, a family portrait, and a coming of age tale. Paula Vogel has packed a lot of material into this relentless little play. My music director observed after our first run that the play is constantly in transition. How I Learned to Drive never stays in one place or even one year for very long. Instead the play invites the audience to take a road trip with narrator and protagonist Li’l Bit as she revisits memories of an affair with her uncle, Peck, and processes not just how he and the rest of the family shaped her but the choices she made and a time when she had no choice.

Lolita, the novel that How I Learned to Drive pays homage to, spends a lot of time on the road. Humbert uses road trips as a means of distracting and disorienting Lolita. Unlike Peck, Humbert does not teach the object of his affection how to drive. Lolita, however, does get behind the wheel. Humbert observes:

“I could make out Lo ludicrously at the wheel, and the engine was certainly running – though I remembered I had cut it but had not applied the emergency brake; and during the brief space of throb-time that it took me to reach the croaking machine which came to a standstill at last, it dawned upon me that during the last two years little Lo had had ample time to pick up the rudiments of driving” (228-29).

Humbert’s deepest fear that Lolita will leave him is about to come true. He fights tooth and nail to stop her. Peck shares Humbert’s fear. Peck, however, teaches Li’l Bit to drive. He encourages her to go to college. Paula Vogel points out “the thing that I find noble about” Peck is “he taught his niece how to reject him. I think he’s given her the tools and ego development to destroy him.” (1997 Interview)

It is not that Peck is a good pedophile and Humbert a bad one. Comparing Peck and Humbert is more akin to comparing the murderers, Othello and Iago. Othello and Peck succumb to demons that they cannot disentangle from their angels while Humbert and Iago worship their demons.

Both Lolita and How I Learned to Drive contain a devastating proposal scene near their conclusion. Humbert wants Lolita to leave her husband and come away with him forever. Peck wants to leave his wife and marry Li’l Bit. Lolita rejects Humbert. She stumbles to explain that she would sooner go back to an abusive ex-boyfriend. Humbert imagines her meaning:

“She groped for words. I supplied them mentally (“He broke my heart. You merely broke my life”).

Nabokov does not give the reader much hope for Lolita. She is a pregnant teenager dependent on her husband for fulfillment. Of course, we are seeing her through Humbert’s less than objective eyes. This is the end of the road for her. Lolita may have star billing as the novel’s titular character but the story belongs to Humbert.

How I Learned to Drive is more of a duet. Li’l Bit’s rejection of Peck is not the end of her story but rather a beginning. The play is a portrait of a woman processing her past and moving beyond it. To do that though, she must not only share the terrible thing Peck did to her, she has to share how he loved her and she loved him. At the end of the day it is that love story that makes How I Learned to Drive so beautiful and unnerving. Sadly most stories of abuse, assault, molestation, and rape do not involve strangers but people who we once loved, people who were supposed to love us. How I Learned to Drive is a fictional reflection of that reality.

Li’l Bit is not broken. As dark and tragic a play as How I Learned to Drive is, it is also full of hope. And humor. If you are in Portland, I hope you will come see it.

P.S. I am producing How I Learned to Drive in collaboration with Patrick J. Cox and Tobias Ryan. We are trying to raise about a third of the total production costs through donor contributions. Please visit our campaign page and consider donating.